Earning a living with music and culture: not just a hobby!23 September 2020Next

Online concerts: a stop-gap for emergencies or a new way to enjoy music?15 January 2021 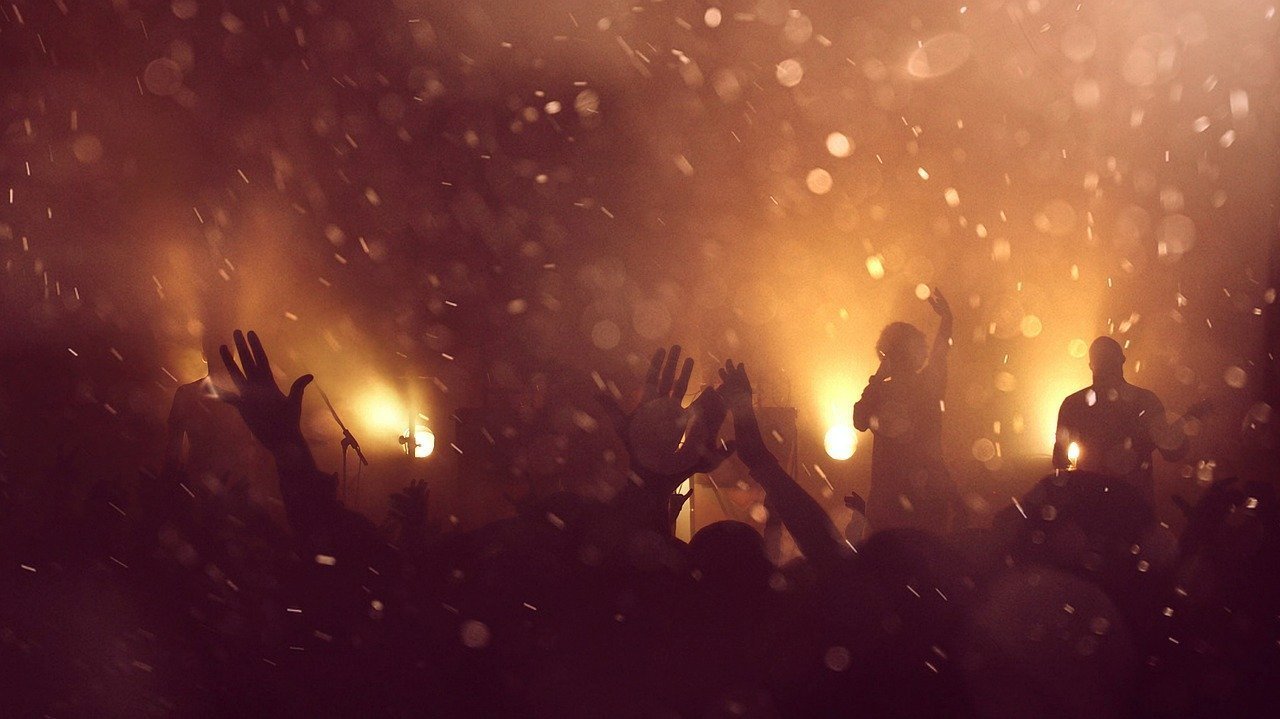 Successful concerts: your path to fame

If you play enough concerts, there will hopefully come a point where the reaction of the audience begins to change. Polite, respectful applause gives way to the excited, enthusiastic cheers of genuine fans. Friends congratulate you on the well-earned success of your band, and strangers approach you at the merchandise stand after the show. In short: you’re well on the way to becoming a sought-after live act.

Once you’ve reached this stage, your band will naturally begin to receive an increasing number of concert requests. In the past, my fellow musicians and I agonised at length over whether we should we ask for fees in return – and if so, how much. I have no problem admitting that I used to find such conversations difficult. I feared that if we demanded a reasonable fee for our performance, the organiser would deem us awkward and unattractive. Looking back, of course, this was totally misguided: we were only sought after by promoters because we had played excellent live shows in the past.

The 3 x 10 rule for accepting gigs

Which gig requests should a band accept and when is it better to decline? The 3 x 10 rule simplifies a seemingly tough dilemma. As a general rule, your band should evaluate each opportunity by awarding a score out of 10 for three key criteria: career opportunities, pay and fun. Only play the concert if the opportunity achieves at least 15 points in total. Does the gig represent a fantastic career opportunity (10) and is also fun (6), although there is no fee? Great. Play it!Concerts you should think twice about are those that offer a minimal fee (2) but no fun (4) and and no realistic opportunity of increasing your band’s profile (1).

Stick to your allotted time as a support

Your goal should always be to win new fans – preferably at every gig. As a newcomer, however, it can be tricky to win over the audience. For this reason, it’s a good idea to make use of opportunities to play as a support act for established artists. Here, too, there are particular rules to follow to ensure that the ‘tour support’ adventure doesn’t end before it has really begun.

The most important rule is to keep your set two minutes shorter than the allotted playing time. In practice, this means that if your slot allows for 35 minutes of playing time, play 33 minutes, then quickly pack up your equipment and leave the stage. It doesn’t matter whether the audience is shouting for an encore or whether you think “one more” won’t do any harm: never play longer than the time you agreed upon beforehand.

It’s particularly important to observe this rule when you are not the only support act – otherwise, you can quickly begin to come across arrogant and presumptuous. Remember, too, that you – as the local support – have a particular role to fulfil: namely, to draw your fans to the headliner’s concert and bump up the number of attendees. Even established indie artists cannot always sell enough tickets to ensure that costs are covered in full, hence why tour promoters regularly search around for promising local support.

In general, it’s important to be aware that the fee and payment arrangements granted to unknown artists for live performances vary considerably from city to city and sometimes even from venue to venue. Below I have compiled the worst and the best arrangements I have encountered as a musician/booker:

This type of arrangement is mostly taken up by very young or inexperienced bands. They are promised the chance to perform in a well-known venue or at a big-name festival and, in return, must purchase a certain number of tickets from the organiser (usually “only” around 50) at a price of (e.g.) 10 euros each. A quick calculation shows that in this example, the ‘buy-in’ for a single concert is 500 (!) euros.

Such an event – which I won’t dignify by referring to as a ‘concert’ – usually features between 10 and 15 bands competing for attention, with each act being permitted to play for 20 to 30 minutes. In the end, the only one who wins here (and earns big) is the concert organiser. Bands are promised that their money can be recouped by selling items of merchandising, but it’s questionable whether this ever works out as planned.

A similar model from the metal scene is the ‘production cost share’ that artists are required to pay to promoters. Tour slots are sold in this way and usually go to the highest bidder.

Is the pay-to-play principle fair? The answer is no, definitely not – at least not when young, inexperienced bands with high hopes pay a lot of money to be bitterly disappointed.

Yet there are more positive stories. I knew a band that regularly ‘bought in’ as tour support for bigger acts – not because they want to achieve success or build a career as musicians, but simply because they wanted to have fun. All the musicians involved had well-paid jobs in the private sector and knew what they were getting themselves into. Ultimately, they wanted the experience of being with their own favourite band backstage and supporting them (financially). If the rules of the game were always so clearly defined, the pay-to-play system would –  in principle – be acceptable. Unfortunately, in 99% of cases, the reality is different.

My band I were once in the practice of organising ‘exchange concerts’ – where we were invited to other cities to perform as a support act, and the artists we supported then came to Karlsruhe to support us. This arrangement meant that if we hadn’t got a home gig planned in the foreseeable future, we had to quickly organise something of our own.

The search for a suitable location, in particular, was often tricky. On more than once occasion, we were offered the option to rent out an entire club. On these instances, my first instinct was always that the owner didn’t trust our event or concept. I advise you to refrain from being swayed by such offers. Look for a club that will treat you reasonably and fairly (see no. 5).

3. Approach with caution: a minimum number of attendees

One common practice is for club owners to share the takings from entry fees on the condition that at least number X of people attend the concert. On the surface, such an offer might appear reasonable. On closer inspection, however, it’s a different story – because the band bears 100% of the business risk. Even if the concert is relatively successful and the minimum threshold is missed by only one or two concert-goers, the band leaves completely empty-handed.

Let’s imagine a ticket costs ten euros and at least 150 paying guests are required in order for the band to receive a 70% share of the takings. If 140 paying guests attend, the organiser will receive 1,400 euros plus profits from the sale of drinks, while the band will receive nothing. How can this be fair?

In many cases, the club owner will deduct a fixed amount from the takings to cover their costs and then split the remaining amount with the organiser (or band). The amount required to cover expenses is usually somewhere between 100 and 250 euros, depending on the size of venue. How is the rest of the money shared? Bearing in mind that club owners also generate additional (non-shared) income from the sale of drinks, I find that organisers (or bands) tend to receive between 60% and 85% of the earnings from tickets once all expenses are covered.

Is this a fair arrangement? Certainly. After all, all concerts involve costs that simply do not arise at your average DJ night (FOH staff, catering, etc.). As such, it’s only fair that a club owner claims back these expenses before the remaining profits are divided up. However, don’t forget that the club owner also generates income from the sale of drinks, and that this income is kept solely for themselves. Thus, if you are offered 50% or less of the ticket sales as compensation for your performance, you might want to renegotiate.

Many clubs will be pleased to have your band as a guest and will offer an arrangement in which earnings from tickets are shared from the first euro. It doesn’t get much better for artists better than this. If 20 guests attend the show, each paying 10 euros’ entrance fee, and the split is agreed as 70/30, you receive 140 euros for your performance. These are good terms for an artist at any level. Unfortunately, such arrangements are less and less common.

Another variant of a ‘fair deal’ is sometimes offered by smaller venues like rock pubs. Though customers in these venues don’t pay an entry fee, the owners agree with the band a guaranteed fee of (e.g.) 150 euros. The venue then aims to earn this back through additional takings on beverages. On top of this, the audience can ‘throw money into the hat’ after the band’s performance. On a good night, this can raise the same amount again.

6. Great: a guaranteed fee or a share of the takings – whichever is higher

While I’ve never been lucky enough to play a concert under these terms, I have heard of other bands who’ve managed to do so. It works like this: you agree to receive either a guaranteed minimum fee (say, a thousand euros) or 80% of the takings from the concert, whichever turns out to be higher. Thus, if 500 paying guests attend your concert for a ticket price of 10 euros each, the band receives 4,000 euros. If only 50 guests attend (resulting in 500 euros of ticket sales), you still get the guaranteed 1,000 euros.

As ever, don’t allow greed to cloud your vision: if low ticket sales have left the organiser badly out of pocket at the end, it’s good practice to relinquish a portion of your guaranteed fee. Dealing fairly will pay off in the long run!

A mistake to avoid at all costs

One of the biggest mistakes I made in the past was to assume that the club owner would make all necessary efforts to promote the concert. Most of the time, however, the club owner will assume the same in reverse. The bottom line is that nobody advertises the show and it ends up with virtually no audience at all.

This, of course, is highly frustrating for everyone involved. To avoid such disheartening scenarios, remember that just the right advertising AND the right venue are crucial. Only play in clubs you know you can (almost) sell out. Alternatively, seek to build up your fanbase by playing larger venues as a support act for better-known bands. If your band regularly sells out small clubs, it will only be a matter of time until bigger promoters start to approach you with booking requests.

Now, it’s over to you! How have you found being booked as a band? How have you kept in touch with organisers during the pandemic? Let me know in the comments – I’m looking forward to hearing from you!